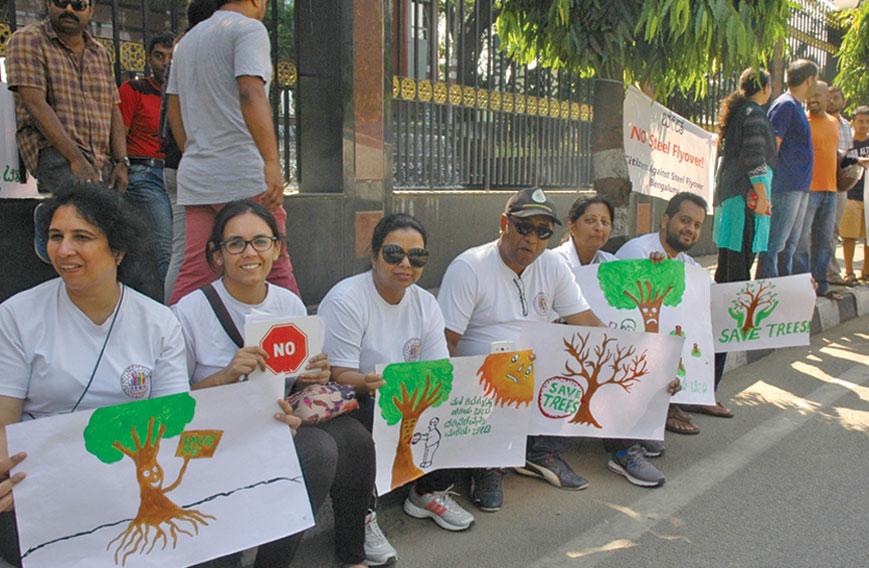 As news of the unsustainable flyover spread, the protests snowballed into a citizens movement

Since mid-September, Bengaluru’s civic news has had saturation coverage about a 6.7-km, Rs 1,791 crore proposed steel flyover from the heart of the city (Chalukya circle, next to the Governor’s residence and Vidhan Soudha) to Hebbal flyover en route to the airport. It has seen unprecedented citizen protests resulting in over 6,000 citizens lining the flyover route for over two hours in mid-October. Both the government and the protesters have dug their heels in about the project’s future. The National Green Tribunal (NGT) has weighed in, asking for an environment review and a PIL is pending in court related to due process not being followed for this project.

A quick background about the road traversed. The previous government suggested this project in 2012 and commissioned a Detailed Project Report (DPR). It did not go ahead with it. The current government announced this project in its budget, revised the DPR and in September 2016 the cabinet cleared the project at Rs 1,791 crore against a budgeted cost of Rs 1,350 crore. As for citizen consultations, the government claimed that over 70 percent of 299 responses in 48 hours to their ad (which had a wrong email id) wanted the project and a mention of this project to the Bengaluru Vision Group drew no adverse comments.

Citizens were concerned at the haste with which this was pushed through and observations by city planners in the press about the unsustainable project quickly snowballed into a citizens movement #steelflyoverbeda (beda means no in Kannada) online. The protesters initially banded under Citizens Against Steel Flyover (CASFO) and after the 6,000+ street protest under Citizens for Bengaluru (CfB), an apolitical group formation.

First, the politics. Understandably, the opposition cried foul about the project and alleged kickbacks, a charge that was also made by other social commentators and citizens. The government struck back, saying this project was okay in 2012 but had become suspect in 2016 when it wished to do it. Makes one wonder whether a smart government does look at the previous government’s projects that were not taken up as a starting point for their projects so that any opposition criticism can be thwarted.

It took the opposition three weeks to say, ‘But we did not go ahead because it was a terrible project!’ Allegations of kickbacks are common in public projects and the Rs 430 crore premium over budgeted costs did give cause for concern. The Bengaluru minister went on record, asking folks to prove the alleged Rs 400 crore kickbacks.

The government’s case rested primarily on the need to ease traffic congestion to the airport and the fact that it was taking up a project of the previous regime. It said there was full transparency and no leakages. The citizens’ opposition to the steel flyover made multiple points — there was no pre-feasibility study done; over 812 trees were to be cut down in the city centre; token, fraudulent citizen consultation had been done; no response to RTIs; the flyover promotes private vehicles over public transport; it will just shift the congestion to another point; alternatives like commuter rail, Metro, alternative road routes to the airport were not being pushed; steel has maintenance issues and is unproven over this length in city-centre environments; and, most important, Bengaluru would be the only city in the world that would have elevated roads, underpasses, up/down ramps next to the legislature and the Governor’s official residence. As one journalist put it, this was akin to sticking a steel dagger into the heart of the city.

This issue is a tale of two competing visions for the city locked in contest. One vision (that of the government) is that the only way out is to build more infrastructure (unfortunately, a lot of it mindlessly), whatever the cost. If the route is unsustainable environmentally, it’s a necessary price we need to pay for growth and development. Anyone who mocks this vision is branded anti-development and while it is easy to be armchair critics, the government needs to finally bite the bullet and take decisions, however unpopular. An alternative vision (that of informed citizenry) is that while growth and development are necessary, we can address it by being more sensitive to nature, scarce resources and core citizen views on what makes a city liveable.

In this vision, citizens expect that they will have roadsides to walk safely, a mix of sustainable commute alternatives, be it public transport, private vehicles, cycling and, most important, walking, enabling road infrastructure, garbage-free surroundings, open public spaces, and the like. That is, growth and development with a heart and inclusive thinking. The alternative vision is mocked at as being too utopian, idealistic and its proponents positioned as unrealistic environmentalists, tree-huggers, impediments to development and whathaveyou.

What has been foisted on citizens is a very poorly conceived engineering project sold as a solution for traffic congestion. This became apparent when the government overnight put up a Phase 2 to this project between Esteem Mall and Hebbal flyover, the biggest choke point on the stretch. This Phase 2 needed to be the first fix on the stretch.

There is a callous attitude about shrinking public spaces and cutting 812 trees in the city centre. Our trees define who we are. Bengaluru was a ‘garden city’ because of its green cover and open spaces that an earlier generation generously bequeathed to us. Now we are brazen about doing away with our legacy and leaving the next generation with a concrete-cum-steel jungle connected with elevated structures. All for a claimed time saving of 10 minutes which is unlikely to materialise according to the Indian Institute of Science transportation experts.

Enlightened global cities are moving towards more open green spaces, walking paths and emphasis on public transport. We seem to be headed the other way to doomsday. In a symbolic sense, if we persist with this flyover project in its current form, it will be the death of Bengaluru as we know it. The city is at an inflection point and the turnout of middle and upper class citizens (who use private vehicles) gives hope that the rot in our public policy decision-making can be halted and made to change course for a sustainable mobility approach.